It’s not surprising CNN knows a lot about images. Launching the 24 hour Cable News Network as an idea gave them ample opportunity to learn how to broadcast impactful visuals.

Fitting then, that John Blake of CNN dissects the O-bama-sama zeitgeist through image via the “iconic” Situation Room photo that a week after being uploaded, has become the most viewed photo ever on Flickr.

Blake’s article is striking as it offers a discussion on framing in more ways than one.  First, drawing from ‘the experts’ Blake attributes adroit commentary on the frames of the stories we are telling ourselves about the progression of “presidential swagger,” race, and gender. Second, and possibly instrumental to the first, is the unmentioned literal device that may contribute or allow such re-assessment to take place: a subtle change to the visual frame of the image itself allows, if you can stand the cliche, the picture to speak a thousand words.

First, the performance of presidential bravado, believe it or not, was invented before a Texan rancher/oilman named Bush strutted into the White House and landed a jet on a carrier. Roosevelt went on Safari with guns big enough to down elephants. Lincoln’s run for the White House hinged on re-alignment to a serious beard. Reagan actually was an actor before president. Clarence Lusane comments that images of Kennedy and Roosevelt were denied a frame of disease (Polio and various assortments respectively) out of respect for the office as much as the man. If we accept the need, or at least acknowledge the existence, of ‘presidential swagger’, Blake suggests that it is evolving to a more subtle frame of self-assured leadership. For Obama, the frame of ‘quiet confidence’ displays not only openness to the opinions of his advisors and in collaboration in general, but possibly also can shift the black-man-in-america frame from ‘angry’ to ‘protector’. As Contee expands:

In pop culture, black men are too often seen as dangerous criminals not as guardians. Even good guys like Crispus Attucks, Shaft and Worf are not uncomplicated: Attucks is mainly known for being the first person shot by the British in the Revolutionary War, Shaft is hardly the most clean cut guy ever and Worf is not actually human, coming from a race of “savage” Klingons. Ahem.

Historian Jerald Podair puts it more bluntly, noting that Obama was always careful to avoid the angry black male stereotype in his public persona, stating, as ‘protector’ he can “now appear strong without being threatening.” A ‘protector in chief’ also supplants the images of detachment, and over analysis Obama was previously criticized for.

The frame of protector for Obama doesn’t need to stop at Race. Blake pulls on political scientist Saladin Amblar to point out the novel inclusion of women in America’s novel ‘nexus of power’ / situation room. However, confusion over Clinton’s ‘cough’ as a ‘gasp’ or ‘gasp’ as a ‘cough’ seems to suggest our discourse of gender roles are here to stay, even when the ladies are invited into the room. Amblar’s generous analysis of Clinton’s portrayal is unwittingly comical in its conflicting messages:

“God only knows what she’s seeing on the screen,” (Clinton has since said she was trying not to cough.) CNN

As commentators poured over the situation room image for visual clues of, body language, stature, position, height, facial expressions and even uncontrolled female exhalations, they referenced these attributes as being within ‘the image’. Defining the representation of the situation room as still life and singular, ‘the image’ was an object that commentators could put meaning to, or interpret meaning from, but a static thing that was objectively the same. A perfect digital, bit by bit copy, was experienced across millions of screens.

Of course, electronic images of ‘digital light’ are hard pressed to be compared to still life of oils and paint; even the most simple visual editorial decisions opens up the the re-configurement of meaning for the situation room. We put genealogies of ‘digital light’ aside for now, to focus on a very simple editorial crop that literally opened up new frames of meaning.

The image directly below portrays the president and his team as first supplied by the White House (see watermark in corner). This was what was shared with millions via CNN and other news outlets – you probably remember seeing it. 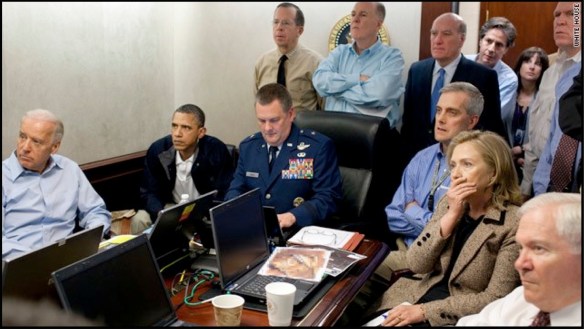 Although Obama is not front and centre, he is squarely centred in the ‘rule of thirds’ space that our eyes focus on in photography. This presents him as the subject of the photo – we focus in on him in and his relation to the other actors in the situation room.

But let’s look again: The below image is closer to how the Canon Mark 5D camera used by White House Photographer Pete Souza captured the moment – similar to what was seen in the viewfinder. (And was the one shared with the experts and reproduced in Blake’s CNN article about the image) 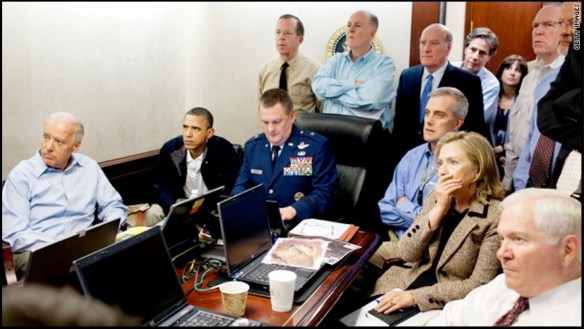 The objective difference? Merely a slight, slight crop in the White House version. No different than what we’d consider in iPhoto or Facebook to help (literally) frame our photo. Note that Getty thinks the crop is important enough to watermark ‘their’ version of this US government licensed work of public domain.

What is the interpretive result? While the closer crop placed Obama ‘self assuredly’ in the rule of thirds of photography, making him principle subject of the shot regardless of other elements, the full crop version removes that privilege. Suddenly his relative size, position, and posture become more apparent against other actors in the room, and the room itself. This literal frame diminishes not only his stature and ‘presidential swagger’ but the coherence of the image itself. In short, it’s not about him anymore. Visually the frame opens up possibilities of Obama as smaller and metaphorically weak, even reluctant but stuck in the corner of the shot and room, hemmed in by 8-9 larger staff with only Joe on his side. Who are these other people then? What are their perspectives? What is the photo now about? Interestingly, The full resolution version actually reveals that Clinton is the ‘subject’ in focus.

The literal loss of coherence around Obama as privileged subject, and coherence of the image as a whole opens up new interpretations or metaphorical frames of what is happening. What these frames can mean as we look at the players in the room we leave to the punditry.
One last word for those wondering whether the Osama KIA photos will ever be released. The cooky internets already give a few hints to why that answer will be negative: 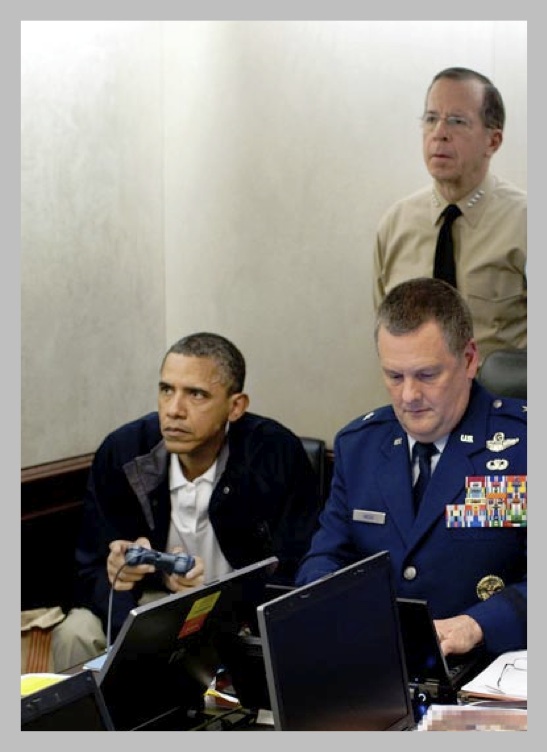